We've always had a cat(s) in the family. We had a cat that was very friendly and inquisitive. She nosed about in a car or a van and ended up being transported to a neighbouring town 5 miles away. We 'lost' her for a week, during which we toured the neighbourhood and searched garages and sheds in the hope of finding her. In the end we contacted the RSPCA who had been notified by a family who had taken her in and luckily we were reunited with our adventurous pet. One cat we had was allowed to roam at will and ended up in a block of flats 'down the road' hiding behind a fridge. Another of our cats kept returning home 'beaten up' with scratches and wounds. He kept trying to win his battle but could not compete with the Toms of the street. We live on a very busy main road and one of our previous cats was run down on this road, so we took the decision to have our present cats as house cats with only supervised access to the outside. 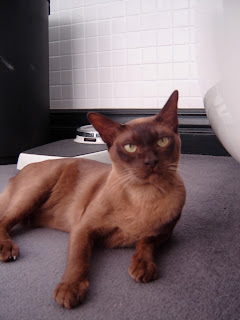 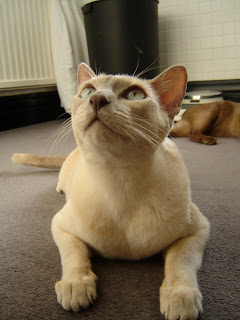 'Walkies!' means hey, we're off out into the garden. Our back garden is enclosed by fences and the only  way out is up. The cats are allowed to roam about the garden but not jump up to the top of the fences. They're very good and after a good sniff round they come back inside for 'Treaties!' If we sit out they will come and stay around us and sit in the sun. Brown puss cat turns into a tom outside (even though he's been neutered) and likes to mark the perimeter at various points just to show that he's top cat. White cat chews grass and stalks flies. Both pusscats hate the wind, rain and cold and will not go outside at all if the weather is inclement. 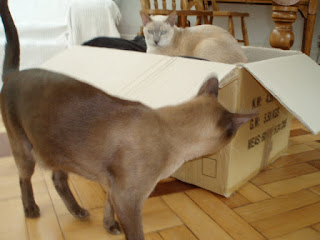 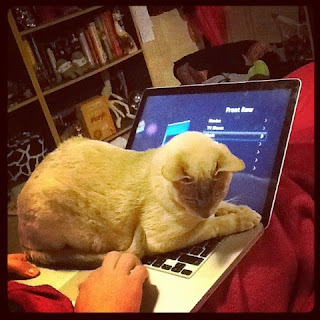 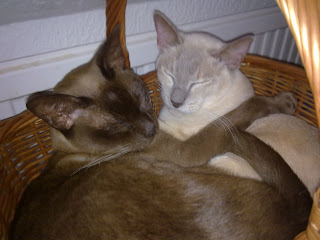 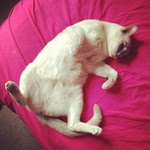 And they love a good cuddle and a stroke. Don't we all!
xx