Corners outside in the back garden

This was a quick 5 minute snap in the back garden.

I just snapped away at things that caught my eye upstairs.

Courgette recipes for the inundated growers

I am so thankful for the suggestions for recipes using this very versatile vegetable. I thought I'd put the examples in a post and if anyone else has other courgette recipes perhaps they could add them in the comments. Having all the recipes together will help me next year when I'm inundated again with this fast growing friend.

TrishWish
I found curry one of the best ways to deal with the large ones too! Fast eaters who were visiting last week had it in their mouths long before they worked out it was not another lump of chicken. That'll teach them to eat properly at my table! They did beg for courgette mercy after 3 days though.

Dawn McHugh
I am doing Piccalilli this week end and courgette is going in that :-)

I slice them very thinly and saute slowly in a little butter and canola oil together with finely diced onions. I add a few spoonfuls of ketchup and a dash of soy sauce, sprinkle with Italian Seasoning ( or just dried oregano or basil) until very nicely done! Delicious side dish. The zucchini I use are about cucumber size.

Here are some of my uses that I've recorded elsewhere in the blog.

Slice the courgettes and drizzle with olive oil. Season with black pepper and a little salt. Bake in the oven for about 15 to 20 minutes then pop on some tomatoes. Tinned toms can be used if real toms are not available. 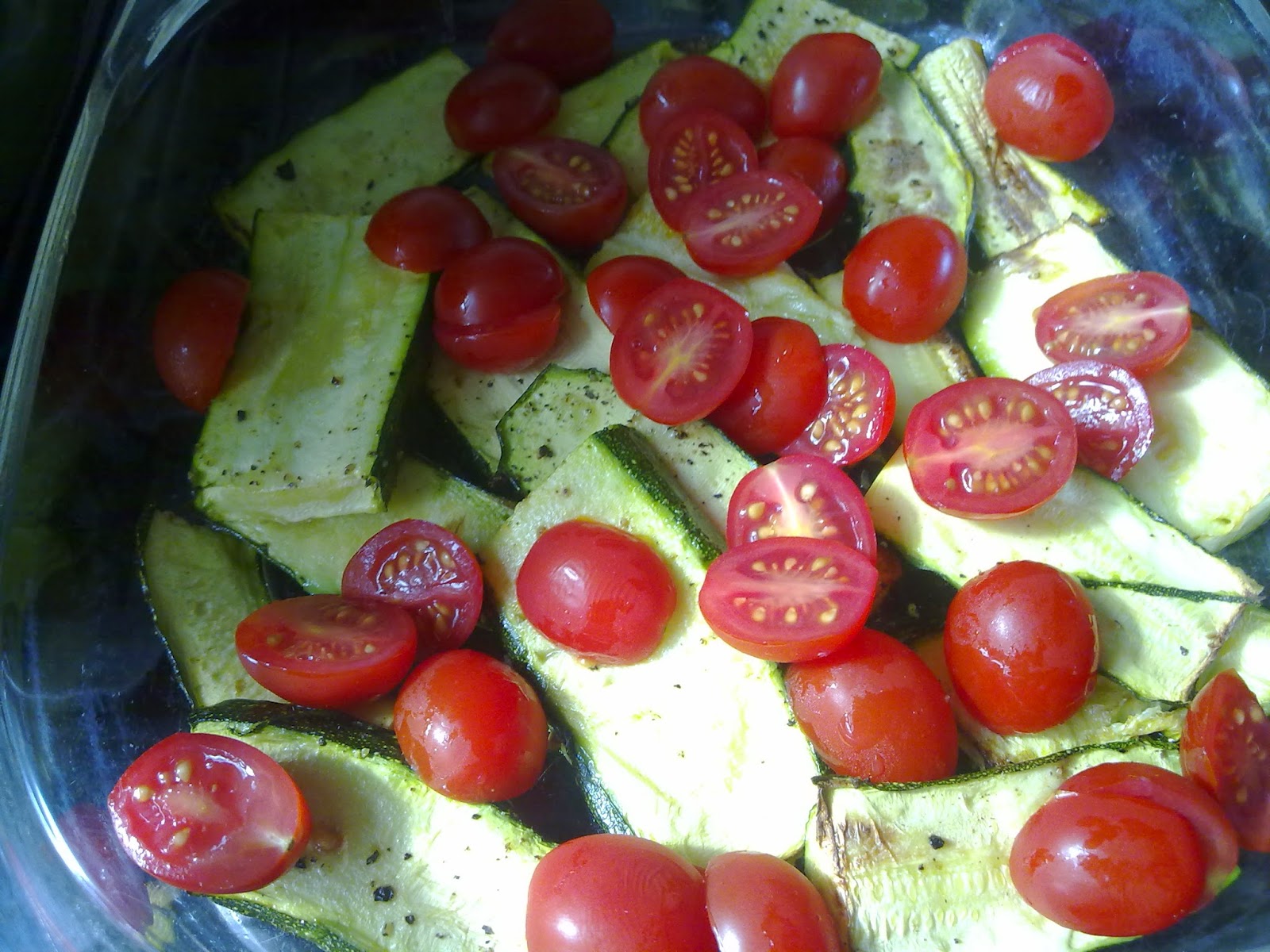 Place some sliced mushrooms a-top and finish off with grated cheese. Mine was a mature cheddar. Put back in the oven for a further 15 minutes.

Cook as the title suggests.

Added Ingredient to other dishes eg. Shepherd's Pie or Curry 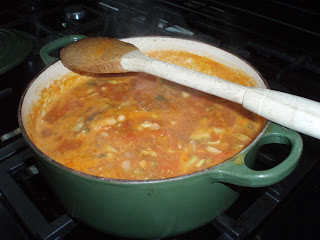 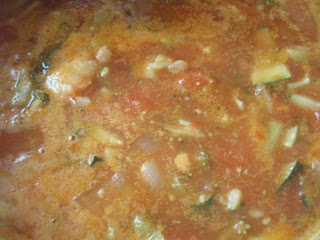 Saute the onion and courgette. Add all the other ingredients and then whizz. 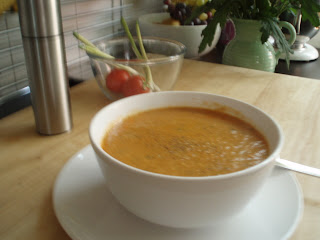 It is delicious with a touch of black pepper.

The courgette was fried in butter, salted and then sprinkled with grated cheese. It was eaten with the other half of yesterday's Shepherd's Pie.

The courgette was successfully hidden and eaten in the Shepherd's Pie today!

The courgette today was in a curry and I made enough to last another 2 meals.

Perhaps I'll have runner beans with it tomorrow!

All the pictures on this blog have been taken with a mobile phone. I download (upload?) the pictures to my computer and then, when I want a picture in a post I click on the picture icon and upload the pictures from my iPhotos. I don't edit the pictures to make them a smaller file size, I just upload as they are and have them on the 'medium' size. 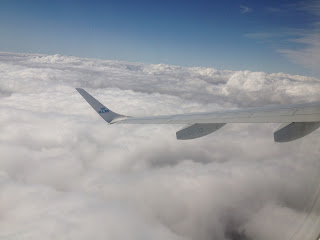 This picture from the aeroplane, taking us to our holiday destination, is 3264 x 2448 and is a 2 MG jpeg. I've been reading that it's a good idea to make larger pictures smaller for a blog as this will not eat away the storage space granted us and the pictures will load faster.

Do my pictures take a while to load at your end?

Isn't it a bit of a faff editing pictures to make them smaller?

Is it worth it? (I only seem to have used up 7% of my storage space according to Google.)

Any thoughts on this would be appreciated.

The mange-tout pods have now dried out and I've taken out the seeds to store ready for next year. 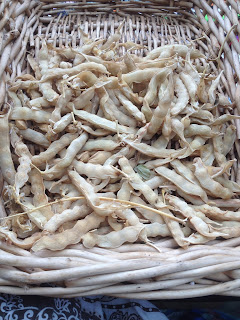 It's been a really good crop this year and I've just about managed to keep up with the eating of it. 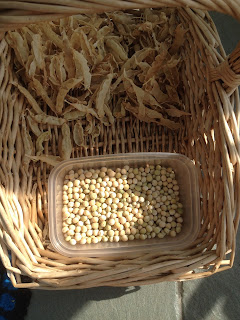 I'm not doing so well with the courgettes though. Having been away for a week there are some quite large ones. I've had courgette, tomato and onion soup and sliced up a big courgette baked with savoury rice, tomatoes and cheese. I'll keep wading my way through them and will give some away as now the runner beans are starting to grow at an alarming rate! 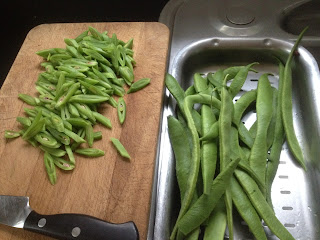 I've just eaten the first 2 bunches of the grapes today. I know what's for afters for me for the next umpteen weeks.

PS Thank you for all your get well wishes. The bruises are changing colour nicely. We're on yellow at the moment!

PPS Thrift D - I'll let the seeds dry out a bit more before I post some on to you.

… for a while due to having fallen down a flight of stairs. Battered and bruised but not broken.

Normal service will resume as soon as possible!

Plan A - Make a dog toy from recycled fleece following a video from Youtube. I watched several videos before I became competent with the four strip plait. Here's the finished product but I thought the colour was a little boring. 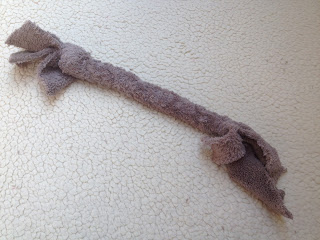 Plan B - Use different colours. I had no more fleece apart so I thought I'd cut some old T-shirts into strips. 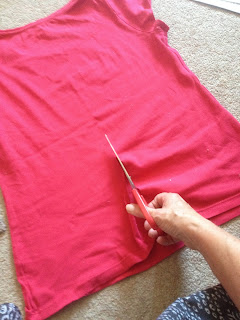 The strips weren't very long but I persevered and … 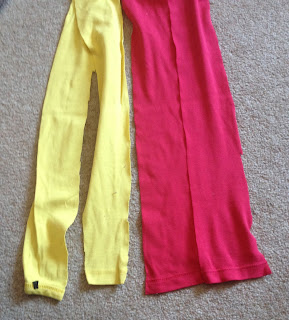 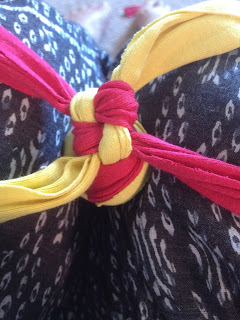 The knots had to be pulled really tight.

Result - Too small. Now how can I cut the T-shirt to make the strips longer? Hang on, I've got an old fleece jacket. Use that. I couldn't remember how to cut a long strip from a rectangle but by trial and error ... 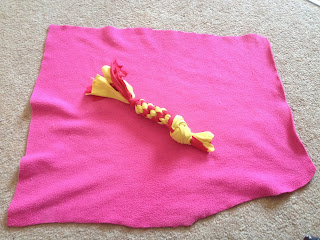 I made a plan. Fold in half and cut up to the edges. 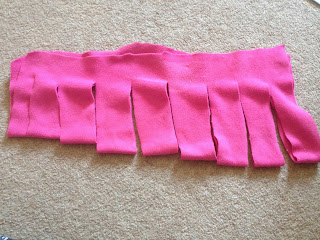 Snip at the appropriate places to make one continuous strip. I rounded off the corners and then set off using two pink strips and two yucky brown strips. 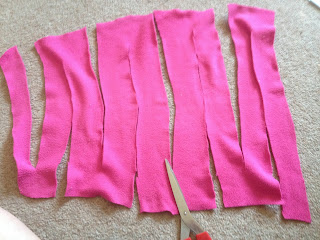 The knots have to be pulled really tight and pulling one strip at once was better that pulling opposite pairs. I worked anticlockwise using this method. 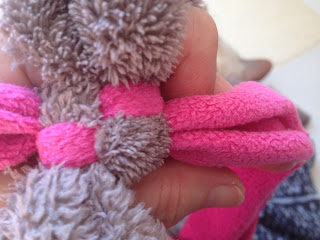 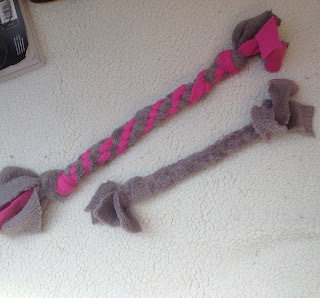 When I get four different coloured strips the pattern will be different. 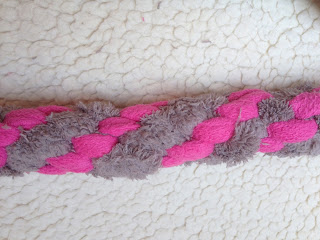 The hardest bit was tying the knot at the end. I had quite long strips so the largest pull was fairly easy to knot with longer ends. 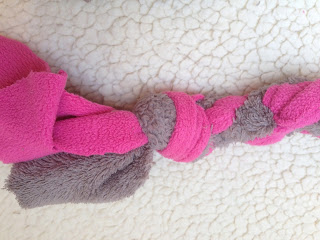 This video shows how to cut a continuous length and how to braid. You may not be able to sit through it all though!

I sorted out my herbs today and organised them by containers. 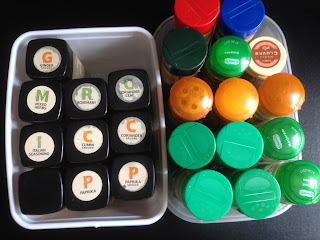 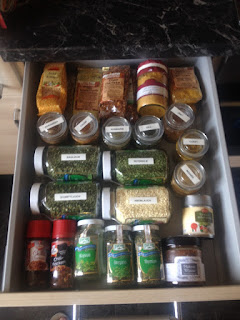 PS re last post - Delia, I saw the allotment and thought of you.

This was how an allotment should be - tended, tidied, productive and loved. A visit around the local allotment showed this in abundance. Here was a space for cut flowers and foliage, 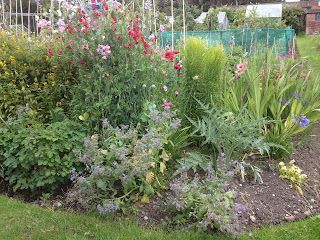 here the beds were set out neatly and orderly. 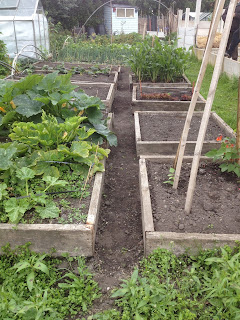 There was a quiet space between the separate allotments for rest and contemplation with seating, wild and cultivated flowers and a small pond. 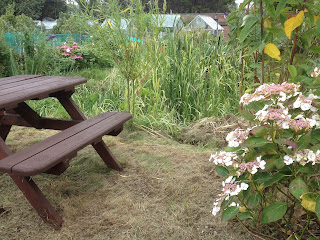 The best allotment on the plot, I thought, was this one where every square inch was covered with produce, sheds, greenhouses and special corners. There were even hens pecking around in one area and experimental growing in tyres and unusual containers. 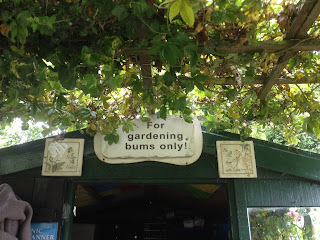 A pergola led to a seating area where the overhead vine could be viewed with easily tended annuals at waist and eye height. Who said allotments should just be horizontal? 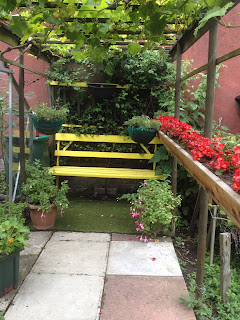