From September onwards is the change over from Summer to Autumn. It's becoming noticeably cooler and the evenings are drawing in. Time to add the woolies to the wardrobe, don the boots and put on jackets and coats. Time to decorate in an Autumnly fashion around the house. So today, after the workout of morning routine, hoovering downstairs and tickling with a feather duster I did my 'artistic, Autumnal arrangements'. 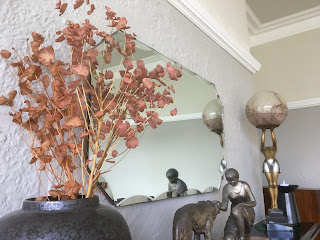 (Stuck a few dried up seed heads around.) 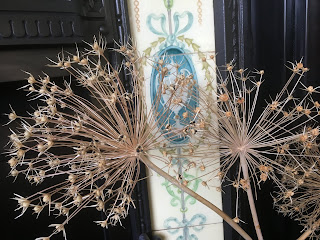 Allium seed heads are quite spectacular. Out came the pine cones, which will transition nicely into winter decorations - how many weeks is it until Christmas? 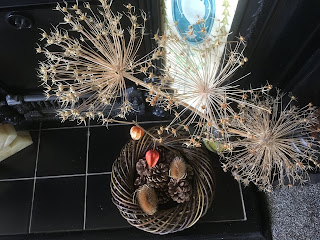 In the kitchen the harvest is being brought in - ie a corn cob which is busy drying out in the desiccator. 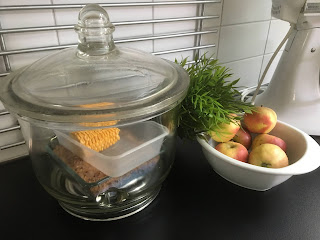 At weekend I will pick off the dried up French bean seed pods and save the seed. The runner beans will be next. DH has already investigated the seeds in one of the very large courgettes and picked some very ripe and tasty tomatoes to put into jam jars. Once the tomatoes have rotted down he picks out the seeds to save for next year.