The cat and the rat were hungry one day - well not just one day - on quite a few days. They were also short on things to do and being inquisitive creatures they decided to explore their surroundings. It just so happened that part of their surroundings contained a Mum blanket which was especially made for their Humom (Mum's DD). 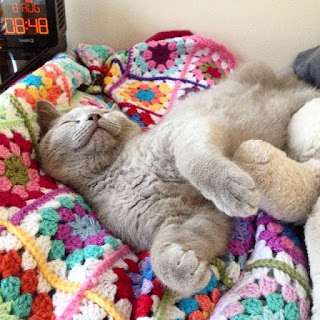 Ah, what a lovely blanket they thought and the cat and the rat cosied up and fell fast asleep. This blanket became one of their favourite places to visit - such a warm, welcoming cocoon.

One day rat was having a meander around the flowers of the blanket when he saw a small piece of yarn sticking up. "That shouldn't be there," he thought and gave it a quick nibble to see whether it would go away. It did go away - right into his stomach. "Wow, that tastes great!" he cried and proceeded to chew a little more. Only a small hole was made so it wasn't noticed as there were other holes around in the blanket.

Another day cat was having a quick roll around the flowers in the blanket, sunning herself and basking in the warmth. As she rolled she caught her claw in the hole made by rat. "Oh, drat that rat!" she cried and pulled her claw free. In doing so a little of the blanket unravelled and made a yarny tail for her to play with. It was great fun. She could even chew on the ends of the yarn and it made a squeaky sound. Such adventures. The chewing staved off the hunger pangs until Humom arrived home from work.

Humom, upon seeing the blanket, folded it over in order not to see the holes being made each day. Eventually the Mum blanket looked like this. 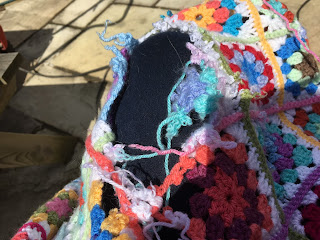 Everyone was very sad - except for the rat and the cat, who thought it was great sport.