I was with Father Christmas the other day and he was in a bit of a dilemma. He had this huge box which he wanted to wrap but he didn't want to waste a whole load of wrapping paper on it as he had millions of other presents to wrap and didn't think he'd have enough for this big box, so we got our thinking caps on and came up with a novel way of wrapping the box which would suit the recipient of the present. I had picked up a magazine from the CS and we tore out some pages and stuck them together in a long line. We had 3 strips of 9 pages which we used for wrapping round the sides of the box. the top was covered in 4 pages stuck together. 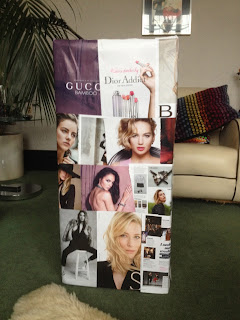 FC was particularly impressed with the shabby chic of the torn pages and the fashion style of the pictures. I had to keep chivvying him along as he kept sitting down perusing the pages and not getting on with the job!

Once the box was covered it needed a little glitzing to make the present wrapping complete. From my bits and bobs box I unearthed a fluffy pink feather boa, a pink butterfly hair clip and an off cut of tinsel.

Wow, he was impressed. 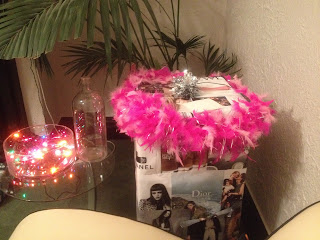 He was so impressed he forgot what was in the parcel and had to ask me. I said that he had to wait until Christmas morning and no peeking before then!